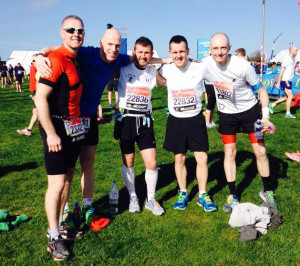 London Marathon 2014 – the BBC claimed the crowds had come out for Mo, when we all knew the real attraction to the masses was the attraction of seeing the St Peter’s lads in the English capital.

2013 had seen our very own Nuala Lemon set the pace around the course, when even Lizzie had popped out to the balcony so she could see the St Peters colours adorned by Nuala come pounding around the final bend and into the Mall.The club secured a few places for the 2014 race through its affiliation to NI Athletics, whilst other members had managed to gain entrance through other means……brown envelopes, bribery, forgery and other such means, which took the club’s participants to 5…..the Famous 5 as we have since become known as to the world media!!

The build-up and training was long and arduous in coming; several tough months in January & February spent out pounding long lonesome miles around tropical Lurgan in the hail, sleet, wind, cold, driving rain and the elements that draw us all to the sport of running!! Everyone plans to run a marathon differently and few find it easy……unless you are Marathon Man Barry Shanks, who makes Chuck Norris look like a wuss!….but as with all who have ever run the distance, the fear of failure drives us on and out on those mornings when it would so much easier to climb back into bed (and Conor Skelton, not for the reasons you are thinking….disgusting!!). You run into the unknown no matter how many marathons you may have run before, with so many potential pitfalls looming over the 26.2 miles, and all you can do is hope that all the training and long runs will pay dividends on the big day.

Everyone copes differently but personally speaking I find that the first three quarters of a marathon are 75% physical and 25% mental, with the last quarter of the distance flipping to 25%physical and 75% mental (and that 25% physical can be utter torture!). Marathons are a pure & genuine test of one’s physical toughness for the vast masses, and not to be undertaken without careful and long deliberation…….and not over a pint in a drunken stupor and act of bravado!

The London marathon is part of the Big 5 marathons in the world, and having ran in the race, I can honestly say it is something that will live long in the memory. The pain and agony does fade with time, but the excitement, the crowds, the route and the masses running alongside will stay with me. The expo the day before the race was unfortunately a brief affair for myself; having arrived on a flight that morning and with a quite full agenda for the same day, the expo was just a case of getting to, get the race number & chip, and flirt briefly with whilst passing through en route to the exit……but it did whet the appetite and start some butterflies ahead of the Sunday race. The Famous 5 a.k.a Barry Shanks, Connor Mulholland, Marty McConaghy, Frankie McKay & Darren Whitmarsh (and not forgetting the Lurgan export to Ballymena, Owen Eagers) congregated on the Sunday morning to make our way out to the start line together (this was also a Lurgan first…..the first time 5 Lurgan men have been seen on a Sunday morning together without a bottle of Lurgan Champagne in sight!) and making our way on the tube was eye opening…..and if it wasn’t for Connor Mulholland and his travel knowledge then the 5 of us would have spent the day in Brighton rather than running through the streets of London! You can take the boys out of Lurgan, but you can’t take Lurgan out of the boys unfortunately!!

We got to the start line at Greenwich Park and the masses and various pens, sponsorship hoarding, baggage trucks etc all brought home the reality of what was happening……..one word sprung to mind at this stage….and it rhymes with Gerry Fitt! Nerves were a jangling for those of us who didn’t do marathons as often as we had hot dinners and personally I was trying to focus on what lay ahead and draw on all those words of encouragement my fellow runners in St Peters had passed my way…such as ‘Are you made in the head?’, ‘Break a leg’, ‘Rather you than me’ and ‘You??? Surely you’re pulling my leg?’ and ‘Will you promise to wear your red hot pants?’……. they’re all such a supportive lot (mentioning no names……here’s looking at you Eunan Magee, Dwyer O’Connor and quell surprise Conor Skelton)!!! Final checklist of needs….gels, drink, music (no I didn’t run with a trombone), race number properly attached, suncream applied (how often do we do this???) and bag passed onto the truck to hopefully be reunited with again at the end of it all…and hopefully before nightfall!!!! 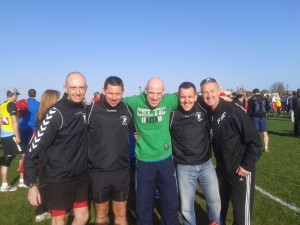 So onto the start line and countdown to the gun…..and off!! The start was fairly congested but not as bad as anticipated but unfortunately Mo and the other elite runners had too good a start on us, to be caught……lucky buggers!! The first half of the route takes you through the south side of the river (for all you Eastenders fans that’s the bottom bit of the opening), taking in the cobbles around the Cutty Sark (a ship which some clampet has happended to park right down in the middle of our running path) before taking a wee route leading up to what’s generally regarded as the half-way point – Tower Bridge; an unbelievable sight of colour, wall of sound and mass of welcoming faces….yes neither Dwyer nor Mr Skelton were there to dampen the mood! A wee right turn and off down towards Canary Wharf, looking for mile 14, whilst at the same time cursing under your breath, the elite runners on the other half of the road who were clocking mile 22 onwards….biggest fear was seeing either the guy in the Rhino outfit or the Deepsea diver suit coming along the other side of the road…..then you would know how well, or unwell you were faring!!! Into Canary Wharf and the financial district…….all those banks that you usually only see on the red letters that drop through your letterbox, getting up close and personal with them in the flesh…and not in court as they usually threaten!! The body at this stage starts to feel the effects of the previous 18miles and your running stance takes on more of a buckled look rather than any poise or expertise….but then that’s maybe just me!!! At least the biggest distance is behind you at this stage…although the hardest part lies ahead. Off in search of the embankment and the wee jaunt up the side of the Thames looking out for the London Eye, which usually indicates the last few hundred metres to go. Pure horror struck me when I caught glimpse of a wheel way off…..and I mean way off, yes WAY WAY OFF….Does London have another wheel as surely that wheel isn’t where I still have to run to?????? Unfortunately so, I can only see the tip of the wheel, sorry Eye, and it’s from behind, and it’s only a dot on the horizon…oh god!! Then the sniper on the grassy knoll beside the book depository takes aim and takes me out with a single shot to the right hamstring…..I struggle on a few hundred yards and then the second shot rings out and this time catches me on the left hamstring!! He had some shot on him that boy, but why me?? I see another poor chap on the ground, obviously he was caught by the same sharp shooter…so I keep moving, ducking and diving for fear of the last fatal shot coming my way. The pain is unbearable and I start searching for a spare wheelchair that someone may have abandoned…….I begin shuffling and doing my best to keep running….running being the loose term, as some guy crawls past me on all fours! I notice the Tower of London on my right, and think a night in the cells, being pecked by the crows would be more pleasant than what I’m going through at the moment. Please oh please let it all end!!! I see Westminster, only recognisable as I am dreaming of food and a HP sauce bottle is sitting in my mind to the right hand side of a massive sugar-free Ulster Fry coupled with a pint of Arthur’s finest! Are we there yet? Come on, can’t be much further to go, look lively, smile and show some panache for the last bit, briefly flutters through my mind…………go f**k yerself I mutter as I catch a firm grip. Keep those feet shuffling….a step on the left then right and back to left again. Am I crying? Birdcage Walk (what a stupid name), oh there’s Big Ben, do I care? Is that Buckingham Palace…..maybe it’s the Taj Mahal, or even Brownlow House? Around the bend and oooohhhhhhh the best sight in this world after 26.2miles……The Mall!!! In my mind I am skipping and jumping as I vault down the last 100metres…..in reality the tv camera’s catch someone like an extra from Michael Jackson’s Thriller video approaching the line! It’s over, I’ve done it, woohooo….now get me to horse guards parade and plonk me against a wall! This running lark is a breeze! We all have our own tales of woe and enjoyment from London 2014……really it was something that will stick forever in the memory (and the toenails will also hopefully return some day!) and someday again I might, just might, get to do the whole darn thing again!

London, you’ve been a great audience……thankyou, goodnight and god bless!