An amazing year for St.Peter’s with even more members joining the club. A new shirt sponsor, enabled all runners to get a new free shirt, a very generous gesture by Patrick Mc Aliskey. Gerald and Jamie have been taking the NI running race series by storm, Gerald Heaney smashing all sorts of records!. Some notable highlights were the 7 club members who took to the streets of London in the biggest marathon in the world, Peter Murray earning his all star U-15 Ireland running award and the large team from the club in Dublin for the October marathon. Dwyer achieved a lifetime ambition in completing the New York Marathon after his disappointment of 2012. It was also with deepest regret and sadness that the club lost one of it’s members, Phelim Brewster. Phelim a friendly face taking time to chat and encourage others, his sudden passing was a great shock felt by the all the club, his presence sorely missed.

January and February and most road runners taking a winter rest it was up to the BORN2RUNers completing the series of 6 forest races, including Castlewellan, Killarney and Gosford. The year started with runners braving the harsh weather in the masters cross country in Lurgan Park and Moira. 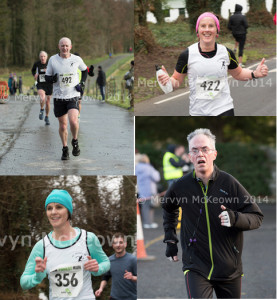 March really kick started the race season with 4 half marathons, and 4 plus 10ks and the weekly park run and club runners all making great strides with pbs all round! Jamie and Gerald– the boys smashed the Queens 5K. Finally dipping the head under the 17min mark. Pbs for Lisa & Linda ! Great running from the girls in a tough Omagh course, biggest race of the year with over 4000 runners. The wind, rain and tough conditions didn’t put off the first 2 club ladies home in well under 1,49 mins!

April London Marathon 2015 – the BBC claimed the crowds had come out for Mo, when we all knew the real attraction to the masses was the attraction of seeing the St Peter’s lad’s n lassies in the English capital. Peter did his 3 miles in 17:39. Barry showed that he could still turn it on…2:59:18. Rioghan had a great 3:23:19. Owen came home in a very pleasing time of 3:44:47. Paul smashed his target by running 3:55:40 and, with a smile from ear to ear, Ciara finished in 4:31:52. Fantastic performances by all (See Just believe blog)

May Marathon Month! Probably the busiest running month of the year to date starting with the Belfast marathon and ending with the Derry marathon and St. Peter’s Ac well represented in all events. There was also the Newry Full and half in the month and Club runner Barry Shanks has managed to do 5 Marathons in 6 weeks-most athletes would be happy to do that in a career of running! Some achievement, and Barry well on the way to hit the marathon century.

June -Well done all on the Lakes 10k, eventful nite, the oldest race in the local calendar with a few pbs for club runners, Mark was the first male home, followed by Sean and Seamus, and Eileen the first lady home in a great time of 38 mins. The club had a over 20 runners in all events, a great showing from St Peters AC!.(See Gallery)

July News Round up—Although normally a quiet month in the running calendar there were a few outings for the lily whites. Gerald Hurricane Heaney winning the local park run on 2 Saturdays and a PB as well. The Newcastle Sea-2-sky,

August– Aug got off to a great start for the club with the Cookstown half marathon and its new race route. The club had over 10 runners and some good times were posted by Jamie, Gerald, Sean and John, were also well represented with 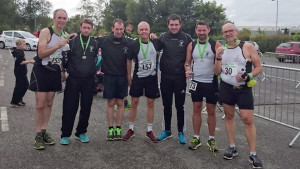 Paul Moore, David Mc Ivor and Dwyer putting in good times.Congrats to David in completing the Pure running half marathon series, quite an achievement well done David! Only one small calf injury to Barry prevented him from posting another good time, but Barry  managed to finish, in recuperation now we wish Barry back to speed as soon as possible

The highlight of September for a lot of the club runners would have been the Belfast/Dublin half marathons. The Beautiful September weather made it very uncomfortable for a lot of runners but great times all round, 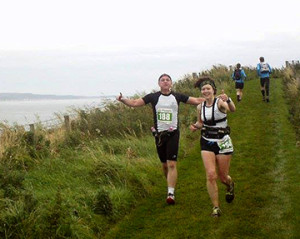 Eunan, Joanne, Grainne and Paul, took on the Causeway marathon. And proved to be quite a challenge, September also seen the Berlin Marathon, the flattest in Europe and Colin Conway from the club Achieving a pb amazing!, The Clubs own race again very successful with over 200 runners in the 5/10k event the glorious weather helped to make the race a permanent part in the running calendar. 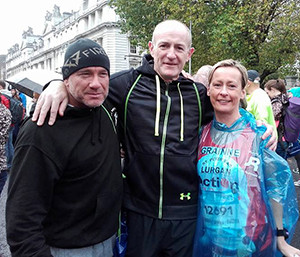 October there was also an International feel to the month of October with runners taking on the Amsterdam and the Dublin Marathons, First time marathoner’s Trevor, Rachel, and Patricia posting great times in Dublin along with the veteran Conor Skelton ,Grainne, Patrick, Mark, Martin, Barry, Paul, Emmanuel also making a great team effort from the club.

November-It may have took Dwyer 30 years from my first marathon, nearly 100 races, to reach 50 and to cover the 5 boroughs of New York, but a lifetime ambition was achieved! (Big thanks to everyone at St Peters supported me in my quest to run the biggest race on the planet) amazing to run down 5th avenue, Central park, wearning a St Peter’s Lurgan top!. 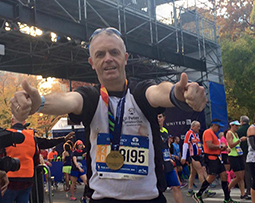 December-Well done to Barry the local Santa run organiser, and club members who helped in this year’s 10th big Santa Run raising an amazing amount for the local hospice. Gerald Heaney finished of his awesome 2015 with a second in the Tollymore 10K, and a 6th place finish in the Greencastle 5 mile race, a pb with a time of 30:34! Nice way to finish off 2015 hurricane!. Jamie also posting a great time in Greencastle,

Jamie also had a great year with pbs in almost all his distances!. The Terminator Barry Shanks finished off his year with small matter of 3 marathons in 5 days to bring his marathons well on the way to the magic 100, amazing Barry – Just Amazing!

The Club is looking forward to an even better 2016.A Happy New Year to all club runners. So keep her Lit, keep her fit! See club blogs and latest new for full reports!