The following are extracts I managed to secure from an exclusive interview with the Olympic renowned International athlete and fellow St. Peter’s ‘runner’, Dawdling Dwyer O’Connor!

So here I stand (barely, and with the aid of a zimmer frame I may add) after another sojourn into the realms of distance running, and with a tale or two to tell of my latest competitive race.  To commence with, cast your mind back to July and the height of the summer (no not Woodstock back in the 1960’s, the days of peace, love and music…..and some organic substances) a time when I felt that running was something I could put Forrest Gump to shame about. Other members of St Peter’s AC were signing up left right and centre for the Dublin marathon in October and I thought to myself, I’ll have some of that, get a wee trip down to see Molly Malone, pop in and visit the cousins Sinead and her brethren,
and get rid of the last few punts I had knocking about the house. I went home one Tuesday evening from the running club, logged into the computer and google’d the marathon websites and lo and behold I eagerly signed up for the marathon in October.

A few months of training under the tuition and guidance of Drill Instructor Eunan Magee, a few half marathons, and the legs would

be ready to go. I downloaded a training program from the website which gave me week by week instructions on how I should be preparing for the run in October and tried to adhere as best I could to what I was being told. I sought advice from my adorable running colleagues about what I should do in preparation and so for many weeks I was simply running and jumping as everyone I asked, notably Conor Skelton, Paul Mulholland and Paul Cassidy told me to ‘take a running jump’! The weeks quickly flew by and come the start of October I felt that the world was my oyster. I always seemed to be 1 week ahead of everyone else doing the Dublin marathon and whilst that might seem strange to most folk, with me it’s par for the course as usually I am always streets ahead of others.

I checked up on the training program and whilst all the others were being told to keep the distances up, my program was advising to wind down and rest. I had hoped to travel with the rest of the Dublin wannabe’s and maybe kip in with one of them (don’t let on to Eunan though as he can be the jealous type and quite protective of me since Derry!), but on a Monday with 2 weeks to go I received an email reminding me that registration was taking place that coming Friday and Saturday. Talk about a shock to the system,’ jaysus’ I thought to myself, imagine having to register over a week before the big day, that’s not too friendly to us travellers, but it was lucky Sinead had a spare room in her Dublin gaffe, as otherwise I’d have had to pay for a hotel 2 weekends in a row! Funny thing was no one else received the same email doing Dublin……….but then again I thought I might be in with the elite runners and normal protocol isn’t followed for professionals like me!

So out with the purse, in with the punts, on with the leprechaun hat and off to Dublin I went. I arrived outside the RDS to be greeted by thousands of others looking entrance. ‘Competition is going to be really fierce’ thought I, until after an hour of queuing and trying to interpret the lingo I finally realised that the crowds were there for the Leinster rugby match and not for registration for the Dublin marathon. ‘I’ll return in the morning’, thought I and I retired for the evening. Up bright and breezy and off to the RDS again the next morning I was greeted by a locked door! I knocked and knocked and no one answered – bit like my trick or treat experiences over the years – so I went to the nearest phone box and phoned the organisers. ‘What’s the craic?’ demanded I, to be told that the Dublin marathon registration was the week after. ‘That cant be right’ says I ‘That’s a joke, I have an email here in my hand here telling me ‘Registration will take place this Friday and Saturday – be there – and see you all at the start line in ………… AMSTERDAM’!

‘Oh feck’ – reality hit me, I had logged into the marathons website but not scrolled down the list of October marathons from the letter A (Amserdam) down to D (Dublin) and had signed up for the Amsterdam marathon and NOT Dublin….and it was this Sunday not next week!!! After visiting a local portaloo to clean my undergarments, I called my usual travel operator Eunan Magee Tour Solutions, and told him to get me sorted here. He advised I needed to sort flights to Holland and he would take care of a B&B for me. So I went in to the nearest internet café and could not get a flight for love nor money to Holland……I could’ve flew no bother and for buttons to the Netherlands, but Holland was a no-go. ‘What do I do’ worried I, so I took a deep intake of breath and remembered the old war movies I watched as a child and remembered soldiers went in through France to gain access to all of Europe so I booked a flight to Paris, France! Arriving into France I went to the bureau de change and changed my Irish euros to French euros and booked a bus from there to Luxembourg. From there I got a train to Vienna changing my money again to Austrian Euros, and then another train from Vienna into Amsterdam and finally having arrived into Holland I was elated that the race was now within sight in the same country. 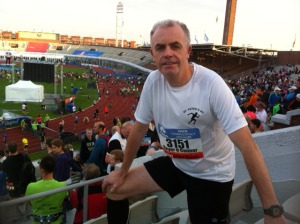 I headed to my b&b as arranged by EMTS (Eunan Magee Tour Solutions) and a funny wee place it was. The houses don’t have normal lights in Holland, every house seemed to have red light bulbs installed and the living room window was bigger than what we are used to back home…..for god’s sake the amount of women who were caught in a state of undress by passers by was unbelievable (for anyone looking proof I have a portfolio of hundreds of photos I took to back up this)! I popped in for some pre-race nutrition of a nice cup of coffee and large slice of cake…….after that I haven’t the foggiest how I made it to the start line or home to Ireland, everything became a bit of a blur – I think the trauma and travel chaos had worn me out!! Anyway by hook or by crook I made the start line and was set to go the 26.2miles around Amsterdam.

Off we went at a canter through the streets and tulip fields and then I was horrified when I seen a canal – ‘I’ve bloody well made another mistake’ I panicked ‘No doubt I’ve signed up for the Iron Man triathlon event rather than the marathon’!!!! So I ploughed straight into the canal and off I went doing my best doggy paddle for a mile or two, before departing the canal soaking wet, and onto the nearest bicycle that was parked up. Another few miles cycling, falling off a few times I might add as the thing had no stabilisers, before hoping off and continuing on with the running. 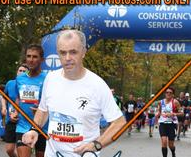 My time and target of sub 4 hours was well and truly gone with this unnecessary swimming and cycling lark, and another massive hitch was when I passed a young boy who asked me would I be so kind to put my finger in the dyke while he ran off for some help…..day became night which became day again and still no sign of the wee bugger!!! When I removed my finger there wasn’t even water spouting out – I had been made a fool of and it wasn’t even a dyke I had been standing alongside –it was just a wall!!

So I finally crossed the line in a time of 1 day 8hours and 33 minutes……..thank god for a few pints of Heineken and a nice big slice of cake!! After 2 weeks quarantine I was finally allowed to re-enter Ireland and so my Dublin marathon experience was what could be termed as ‘slightly’ different to the rest of the Dublin City Ramblers!!!!Dwyer O’Connor interviewed with words penned by the Lurgan David Frost…..Frankie McKay. 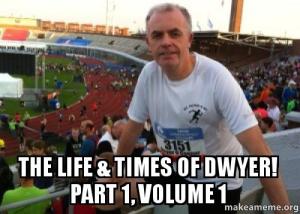 Keep an eye out for ‘The Life and Times of Dwyer – Part 1, Volume 1’ from all good bookstores this December! (Bear in mind that the book makes the Britannica series of Encyclopedias appear to be a quick and riveting read!)