‘In The Town I’ve Loved So Well….’ Lilly White Lundy

Well, a wee walled city in the North West of the country took centre stage last weekend for the running fraternity of the country; as well as a handful of wanna-be runners from the St Peters AC in Lurgan. The goal was 26.2miles around Derry…..a walk in the park to some, but for most of the St Peters runners, a severe kick in the groin, followed by a hammer to the head! They came from far and wide to take part, so it was good to see the event adorned by Lurgan’s ‘elite’….plus it gave Lurgan a weekend without the rabble that have dragged the good name of the town into the gutter over the years. ‘Dynamite’ Dwyer O’Connor drove the specially commissioned bus to Derry (no it wasn’t yellow!) and the merry band (comprising Rioghan ‘Roadrunner’ McClean, Eunan ‘IronMan’ Magee, Paul ‘Old Bull’ Mulholland, Barry ‘Bust-A-Gut’ Shanks, and Paul ‘Sicknote’ Cassidy) departed on the Saturday afternoon full of song and cheer….yes Dwyer had brought his ‘Best of Jive Bunny’ cd with him. 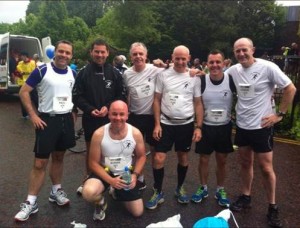 Derry has had some great occasions over the years, none moreso than the City of Culture festivities of 2013, but nothing compared to having the celebrities from Lurgan roll into town – and let’s not forget Lurgan’s answer to ‘the 2 Ronnies’…..’the 2 Conors’…..Mulholland and Skelton who were not on the designated official travel mode, along with Sean Beattie, but who would be up acclimatising and high altitude training separately from the balloons, sorry I mean ‘Team SP’! Derry rolled out the red carpet for their arrival, and the city’s famous sons eagerly awaited their procession through the streets – Martin McGuinness, Phil Coulter, Fergal Sharkey, Nadine Coyle, Peter Cunnah, and Sinead O’Connor….well she is related to one of the team even if she isn’t from Derry! The city even went to the bother of getting a wee mural done to make the Lurgan lads feel right at home:- 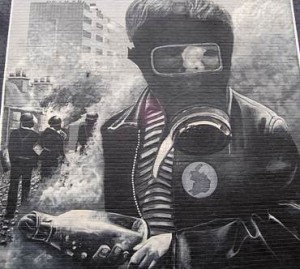 They duly arrived and after a round of official meetings with dignitaries and high ranking Derry folk, they made their way to their booked accommodation. ‘Booked’ accommodation being the appropriate word, as despite claims of confusion and misunderstanding, the facts remained………4 guys, 2 rooms, 1 twin room and 1 double room were what was booked! Despite protestations from Eunan that he was in utter distress at 2 of the 4 of them having to share a double bed, the 2 guys who claim that they don nothing but their birthday suits at bedtime, skipped hand in hand down the corridor and into the double room (I won’t name names but a wee clue is Uenan & Wdyer)!!! Anyway we are an all-inclusive, open to all club and each to their own (ladies get your hats dusted down in case you need them for the pending nuptials……I am sure you agree they make a lovely couple). 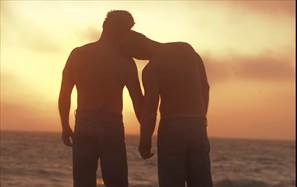 So after all the exertions of the Saturday, the Sunday brought the small matter of the marathon run. Up early, dust down the cobwebs, a few star jumps to limber up, a bowl of cocoa pops & a bacon butty (I did say before how professional they were), and on with the gear (no I meant the running attire Eunan, not the leather & chains you had up for Saturday night!). Club colours proudly on show and team photo before last dash to the portaloos, to help ease the nerves. One last prayer gathering by the boys and then up to the start line to jostle with the Kenyan runners for the inside bend of the first turn. The Everglades was the start point, and it was great to see the hotel back up and running after the silly bomb attack the few days previously. The deputy first minister was the starter for the event, so a hooter was used rather than the firing pistol, to set the runners off and running. 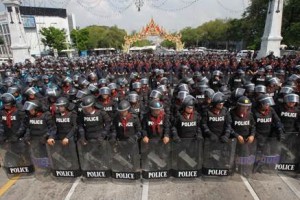 Derry does a great job of hosting a marathon and indeed the crowds must have been almost 10 deep in parts (see below) and drove the guys throughout the city and when things got tight, they were there to mentally lift morale and drive the legs when all else was crying out for them to stop. I personally think that the Derry spectators must have been thinking if they didn’t cheer on the Lurgan boys then they ran the risk of them staying another night, and really the residents could not afford to have their property prices drop yet further from the Lurgan invasion.

The spectators were out with sweets and drinks (see below pic of the bottles the Lurgan guys received en route) and every little helped refuel the engine and keep the guys in full flight around the streets of Derry. 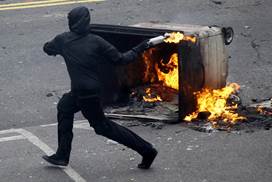 Some miles were tougher than others but credit where its due, the guys done really well and all should be extremely proud of their achievements….26.2miles is never an easy feat. The race claimed one Lurgan injury, with Connor Mulholland, unfortunately unable to complete yet another marathon, and for someone who has run sub 3hours, was pure devastation. Rest assured Connor will be back and running as well as ever shortly. ‘Bust-A-Gut’ Shanks & ‘Roadrunner’ McClean were first of the Peters runners home in just over 3’30minutes, followed a short time after by the ‘Old Bull’ Mulholland and ‘Gurner’ Skelton. 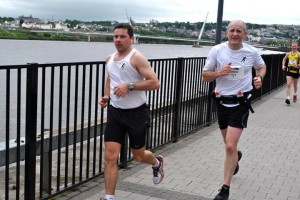 Over the 4 hour mark and in came ‘Dynamite’ O’Connor & ‘Ironman’ Magee – who kept getting mistaken for team GB’s Mo Farrah – you can see the similarities are canny:- 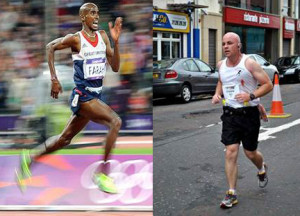 They were also joined in the sub 5hour category by Sean Beattie & ‘Sicknote’ Cassidy and really all were extremely well pleased with their times posted and the Walled City Marathon 2014.So well done to you all, and suffice to say that the boys from St Peters AC Lurgan will always receive a welcome as warm as Lundy when next in Derry!!