MUMS ON THE RUN ! 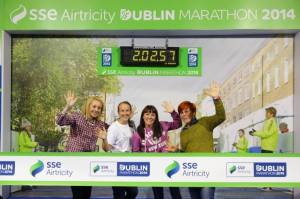 Who’s idea was this? Slap me if I ever mention ‘Marathon’ again!!! Was a couple of the sayings we frequently heard whilst treading the pathways of Lurgan in the training for ‘Dublin 2014’!

The reality hit on Sunday 26th with the expo in full swing, walking round looking to pick up a few bargains, but they must’ve knew how gullible we were when Eileen bought a pair of €42 socks!! (But they used to be €49 so really they were a bargain!) 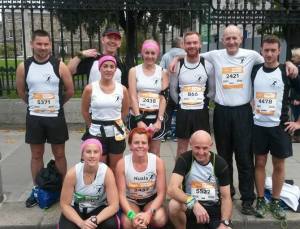 Checked into the hotel and met up with fellow St Peters AC teammates for the last carbload; What are you having? What should I eat? Will this run through me? As you can well imagine all riveting conversation!

Then it was early to bed ofcourse, though no-one slept – excitement or nerves were kicking in, so 6am rise, time to get ready, number on vest, Vaseline in all the right places, and last-minute runs to the loo were order of the day. Now as you all know I’m a very knowledgeable person, so having done the marathon before I bestowed words of wisdom on the others……wear an old t-shirt to start, bring a spare one in the bag for after etc; so did they listen…..NO! I brought my belongings in the bag as did Linda, but the other two knew better!!! Eileen’s husband was going to approach her at the finish line and wrap her coat around her!!! Or so she thought!!! 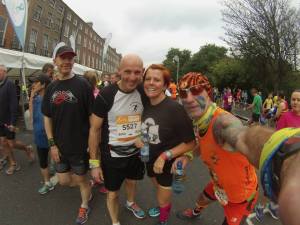 So walk to start began before a few photos on the go and then off we went! The heat was unreal and the wind in the Phoenix park was like a tornado, but on we went mile after mile. Barry had supplied us all with a wee immodium (Ed. Is Barry peddling drugs????Police????) – just in case, and no it didn’t work, so approaching the 15 mile mark and with no portaloo in sight, my quick thinking too me through the doors of McDonalds to use their facilities. Then re-joining the troops I came across Conor ‘The Gurn’ (one of many alias) Skelton who was struggling with a hamstring injury (he is over 50 btw). I gave him a few words of encouragement, there was only one way home – the Finish Line!! I plodded on, the crowds of people who came out to show support was amazing, they were offering sweets, drinks, even leg rubs to anyone who needed them. But it was also very real and sad the amount of people collapsing and just not able to continue. 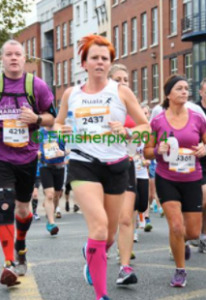 I really do think when you hit the 20mile marker the signs should start to count down i.e. 6miles to go, 5miles to go, 4miles to go……..It would help as the brain doesn’t function so well (does it ever?) at this stage! So the final few miles were in sight and the Mighty Mulhollands doing a fine job of cheer-leading (Paul complete with tutu and pompoms!) The finish line was near and the crowds were getting deeper, its probably the only time I’ll ever feel like a superstar, willing you with each step, cheering your name – the feeling is like nothing else plus you know you can stop soon, so medal on, t-shirt & goodie bag in hand, I went to find someone I knew and the first ones I came across were Paul & Barry having a wee post race summary. My trustee bag of belongings and spare t-shirt collected I met Eileen who’s first words were ‘Have you my coat in your bag?’! ‘No!!!’ So it seems ‘My Thomas’wasn’t able to stand at the finish line and wrap her in her coat!!! 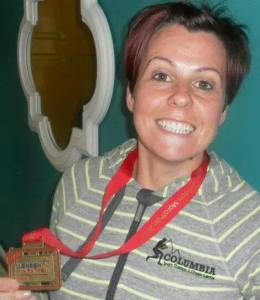 So back to the hotel and we caught up with the rest of the squad; had a great wee laugh exchanging experiences, a few wee jollys and then homeward bound. It all came to an end too soon, but was great to be part of it all. Will I do it again? Yes probably, most likely, and I’ll probably moan about it all over again!!!