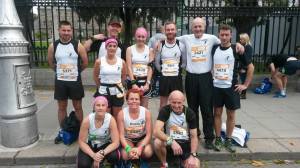 This is a regular fixture for myself going right back to 2006 when I first completed it. During these years a number of things have changed apart from the nerves, yes my old nerves play up ahead of most marathons.There was a bit of a build up at St Peter’s AC with quite a few athletes taking part.   One of the most frequent questions I got asked was about training and the best I could answer was for you to try to find what works for you and stick to it. I try to work around a long slow run, a speed session (usually intervals) and a marathon pace run. Anything else in between is generally a recovery run or another marathon. 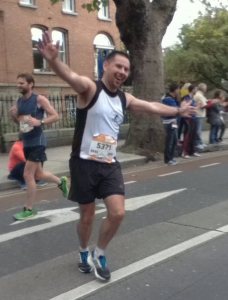 As the time got closer to the race there is always the question of taper and wondering if we should be doing more or less training, this is where rest days really come into their own keeping yourself fresh for the big day. Collected the number at the expo and there was another change in the way we had to queue, to me it slowed the whole process down unless you were in the know and got moved to the front of the queue. The ritual of pinning the number onto the vest and setting everything out the night before was done before we met up for the last supper. 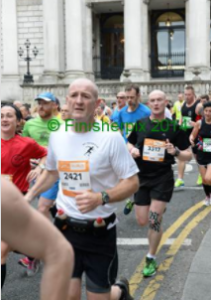 Moving onto the marathon day and the conditions were very good, nearly too good with the extra bit of heat, we aren’t used to this heat in October or the summer for that matter. Dandered around and met up for the club photo, why is it always a problem trying to get everyone together at the same time. Last bit of wishing each other good luck before setting off for our starting waves and moving up to around where the pacers were at. I went up with the young ones leaving Conor and the others to find their own places. 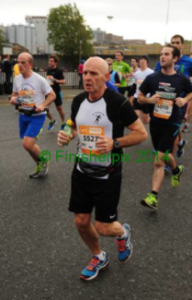 Unsure what was to greet us as we made our way along the winding streets towards Phoenix Park, we soon came face to face with the headwind and a bit of a climb up past the Zoo. When we were returning back into the park there was a downhill part and it was a bit hard to slow the pace down to what it should be. This is where I seen the first casualty, a guy was limping on and it didn’t look good for him. We soon got back onto the familiar route albeit with a few extra miles by that stage, on the plus side it meant we were closer to the finish line. I noticed a lot more casualties being treated on the side of the road by the first aiders and also a number of runners stopping to stretch out a limb or two. Note to self – get some warm weather training next year. 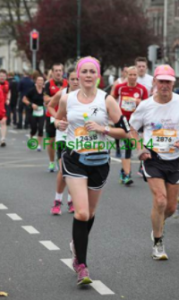 Running along through the miles I have to number crunch, x miles in x time which can either be good, too good, bad or really bad. I was happy with the way it was going through 10k, 10 miles, half way and right up to 30k where the wheels started to slacken a bit. Had to work a bit harder on the mental side of things but my target was slipping away.The extra miles early on also meant that the ‘Wall’ was going to try and get us at a slightly later stage of the marathon and indeed from around mile 22 I started to slow, maybe I should try to get more longer runs in as part of my preparation. When I managed to calculate that the target time was gone I decided to just enjoy the rest of the experience. 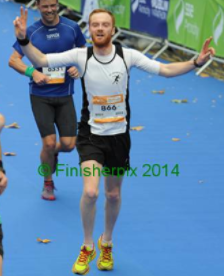 Out around the RDS I caught up with a guy who looked like he was really struggling, even more than I was, so I turned to him and encouraged him to run with me. This helped both of us to work together and keep the effort going. The last 4.2 miles were very tough apart from the point where I seen the “M’s” standing cheering everyone on and in this case the camera was telling porky pies, it was really hard work. I was glad to see the clock on the home straight and thought to myself ‘This isn’t too bad of time after all’ then as I got closer I noticed the finishing line further back. I caught and passed a few other runners as we approached mile 26, there were also a few stewards 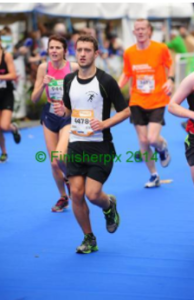 making their way down the course to support those struggling to reach the line.

Having slowed during the last few miles I was only saving my energy for a bit of showboating and as well as helping me get to the line I hope the roar of the crowd helped others to keep going.

I was delighted to cross the finish line and stay on my feet, not sure I could have managed an interview like Eileen after her first marathon but then we have all learnt over the years that there are a few of the club members that can fairly talk. Made my way back to the bag collection area and I think this added about another 10 mile to the run or at least it felt like it. Caught up with most of the rest of the club before returning to the hotel to rehydrate.