This day was a long time coming, going back to 2013 when I last done the Ultra I knew that day that I would have to come back some day to put right that run which I felt could 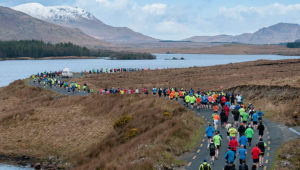 have been better.  In the years between the two I headed off to London and enjoyed getting a PB at marathon distance.As part of my prep for this year I done a couple of East Antrim Marathon Series Ultras, the first of these was a 6 hour challenge although I set my stall out with a target of 30-35 miles so when I reached the 34 mile mark in 4 hours 40 minutes I didn’t hesitate to ring the bell.

The next one was another of the EAMS only this time it was a 3 laps of Knockagh which had plenty of hills over 31 miles, the first two laps were grand but the third almost destroyed me. 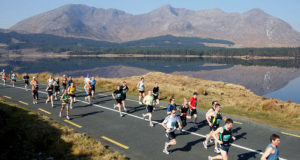 A week before Connemara I ran up to and completed the local Citypark parkrun before running back home with a total of 14 miles.  By the time I reached the house I was well busted and my only thought was ‘How am I going to find another 25 miles next week?’ 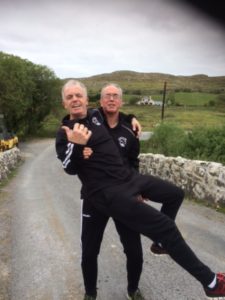 Anyhow race weekend and it was a long road trip to Galway via Dublin with Dwyer, Paul and Paul from the St. Peter’s AC.  Race packs collected and it was off to find the digs for the night.  Dropped my stuff off at mine before heading further into the wilderness for theirs. 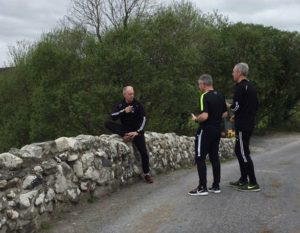 Out of nowhere appeared a sheet with what best looked like a treasure hunt map with a few notes on it.  Dwyer had done his homework and realised that he could live the dream of seeing the bridge and house from ‘The Quiet Man’.  “Keep an eye out for the big sign” well we have yet to see the sign but somehow found the bridge and the photos to prove it.  On up the road we checked out the Peacocks menu for a pasta party that evening.  Turns out their B&B was beside the cottage from the Quiet Man, more photos to prove it but then again it could have been any pile of stone lying about 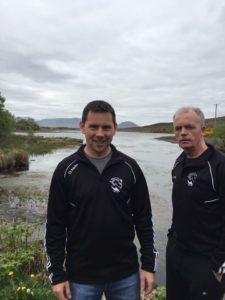 Getting down to the serious side of things we set off around the course so the guys could see all the wee bumps on the road they called hills.  Plans were made for meeting the next day at some stage.Race day morning and it was up early for breakfast before getting the bus to the start and the nerves were kicking in.  Too many on the first bus so a few of us had to wait on the next one which worked out just as well.  At the race HQ we had to attend the race briefing at 8:15am and here we were able to leave some food which would be transferred to the particular mile feed station, I opted for mile 19, 26 and 32.  Last time my last one was at mile 35 which I didn’t use so tried something different.  Got bussed up to the start and weren’t too long before we were away. 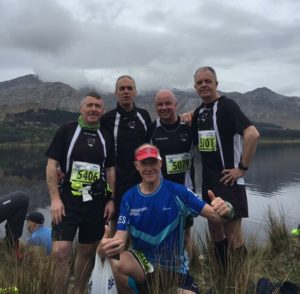 My aim was to try to keep the pace in and around 8 minute mile (mm) pace for as long as I could knowing the later part of the course would be hilly and would slow naturally.  I also wanted to break the race down into 3 parts of 13.1 miles.  The first 13 miles were fairly flat with a few slightly rolling hills, tried to hold back as some of the other ultra runners were passing me, stick to my own race plan.  4 years ago my time over the first part was around 1:50, this year was closer to 1:46 so I had banked a few minutes. 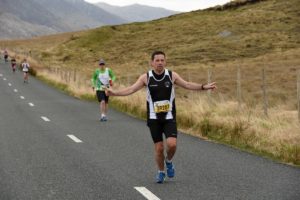 Moving to the 2nd part and I could see the marathon runners further up the road and resisted the urge to chase them down, hopefully I could get some of them over the next 26 miles.  The 3 amigos had been talking about their pacing and mentioned 11 minute miles so I started to try to work out the calculations and if they started an hour and a half after me and if I could stick to my 8mm pace I reckon I could catch them by around their mile 7, my 20 miles.  My pace seemed to be fairly steady and noticed a few miles over 8mm but that would be when some of the hills started.  Around mile 14 I started to feel a bit of a niggle in my left calf, no it can’t be the end of my race, then around mile 17 I felt a tightness in my left quad. 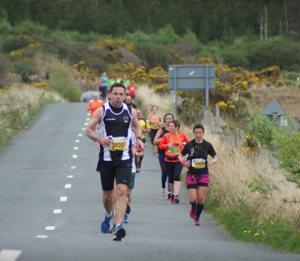 This just couldn’t be happening.  The crowds got closer and closer and by around the marathon 4 or 5 mile marker I could see a strange figure in the distance stepping to the side and taking a photo, it couldn’t be or could it. When I got to within 150 yards I shouted and low and behold the guys were just in front of me, a few pleasant exchanges and I am glad to say I was now starting to move away from them instead of towards them.
The other problem was that there was another club runner further ahead and it wasn’t too long before I met up with Eunan who was running with the 4:30 marathon runners.  A few words of encouragement and I was free of the Lurgan lads. I was soon at my first food station and only fancied half of the energy bar just as I hit the first main hill which went on a bit, it was around this stage that two other ultra runners caught up with me and one sailed by while I ran a few miles with Lucy who funnily enough (or not for her and her husband) was staying in the same B&B as the other 3 boys.  If the truth is told we both kept the pace going and had a similar target.  The few downhill sections hurt as much as the uphills but the pace stayed within a reasonable limit considering the elevation.  Just as we approached mile 26 I needed a pee so stopped at the portaloo, by the time I came back out Lucy was a few hundred yards further up the road.  I was ahead of my target by mile 26. 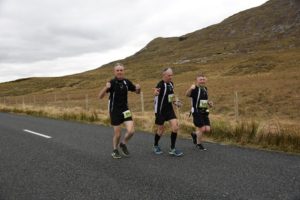 My second food station was approaching and again I could only take half of the energy bar and a couple of the shot bloks just as I was taking on one of the toughest hills that went on and on from mile 26 to mile 28.  Still getting plenty of encouragement from complete strangers as I passed them.  By this time it was starting to get a fair bit warmer and I was trying to make the most of all the water stations.  From mile 26 I didn’t see another mile that started with a 7 (pace wise) but knew I was ok as long as things didn’t go belly up.  Tried to keep focused and knew I was getting to that time or distance that could really hurt.  Passing a few marathon runners and some ultra runners I was thankful that I was feeling very good considering, even the aches in my leg seemed to have gone.  Started to take a second water bottle at the water stations and

when I reached mile 32 for my last feed station I was debating if I should take it or just run on remembering how the last time I ran the course that I didn’t need it.  Finally decided that I should take it and if I didn’t need it I could drop it or give it to someone else, well a quick look turned into a bit longer and it looks like someone either took my food or I made a balls up at the race HQ and put it in the wrong food bin.  Anyhow I am glad I didn’t really need it as I still had more shot bloks from earlier.  Running towards the 35 mile mark I remember passing a couple of guys who were from the Moira area and encouraged me on.  Next up would be the ‘Hell of the West’ the two mile long hill that just went on and on and on.  A lot of people were walking by this stage but this wasn’t going to be an option for me. 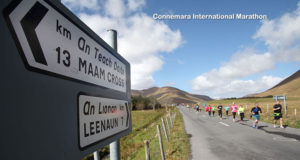 Noticed a familiar blue top ahead of me of a Dublin Bay runner and it turned out to be Gary, caught up with him and by that stage I couldn’t even say hi so I squirted water from the bottle over him, I think he said ‘Good Lucker’ or something very like that.  Approaching the top of the hill and there were a couple of guys who seemed to be struggling and one had been on the lookout for some jelly sweets, I was confident that I could make it to the finish with what energy I had left so I plucked the last packet of shot bloks from my pouch and chucked it to them, got a couple of words of thanks and ran on. 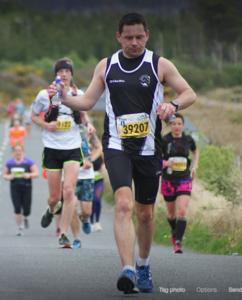 Could still see Lucy, who I had been running with earlier, just ahead of me and the gap seemed to be closing.  Met up on the downhill and by that stage we both knew we would be ahead of out target as long as nothing went drastically wrong.  One thing that really stands out was just how rough the road surface felt just before getting onto some smooth tarmac.  Approaching the last half mile and I could see another ultra runner just in front of us so I shouted and got a high 5 but when I said there was another ultra runner with me he seemed to make an effort for the finish line, I thought this was a bit rude.  I turned to encourage Lucy on, who didn’t actually need any encouragement either, but she signalled that I run on. 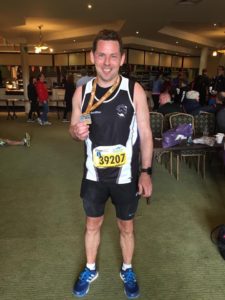 Caught up with the other guy and the spectators started shouting “Sprint finish” I’ll not repeat what I replied but if sounded like “Duck bath”.  The other guy started to go for the line and it was only then that my mind was made up and I caught him and sprinted ahead of him to finish the 39.3 miles in a time of 5:24:36 around 20 minutes faster than four years ago.  Faster in each of the thirds which was part of what I set out to do.

Couldn’t stop smiling even with the aches starting to appear  but with getting my medal, t-shirt, soup and some grub made it a little easier.  Job done, will I be back – maybe.